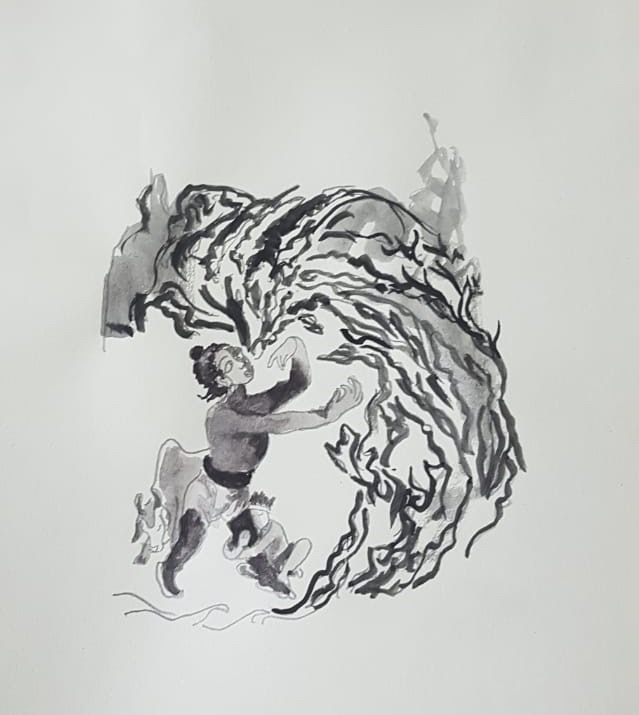 Can we really sort a chaos by only being another voice adding to that chaos? Thinking that their voice is the sane one, the dharmiks also come and share their thoughts, knowledge and suggestions to rest of the world in the limited confinement of a social media platform. They (most likely) do that on more than one platform, each time in the confinement of that social media platform, talking in the format (micro-blog, audio-visual, Q-ans and so on) of that platform.

All this for explaining and bringing back people to something which is a complex system called sanatana, if I may call it so for the sake of discussion (see, I just did it by calling sanatana a system so that I can say what I have to say using the limited vocabulary and space I have got).

Why chaos? Because they are so many voices with each one saying ‘listen to me’. A knowledgeable and well-intentioned dharmik writes a book in an ‘acceptable’ language about certain aspect of santana, sharing deep insights, reasons, explainable tarkas and suggestions on how to start following it; but at the same time there are 100 other books written by modern hindus with the repackaged truth, they use the rules of the game and have better shelf availability of their book. This proportion of dharmik to modern hindus is what, 1:10 maybe 1:100? Dharmik’s book doesn’t reach the desired shelf, the desired audience. How is the audience supposed to know that the dharmik’s book is the genuine and better one? We blame the audience for not using their ‘viveka’ to choose, we blame them for not being the seeker and search for themselves but why do we forget that so many dharmic warriors have to come up because this collective ‘viveka’ is very weak and the spirit of being a seeker has been killed in a planned and structured manner in last few hundred years? So does the job start or end by simply calling them a failed collective? Does it solve the problem? No. They rather get further pushed away, as being defensive is in the DNA for atleast 2 to 3 generations now.

While doing manan I struggle with the question that can we really explain or move people to a complex system called santana or vedic sanskruti which is fluid, interdisciplinary and doesn’t use the tool-set which is popular or understood by people today?

This complex system which has been made surprisingly simple by our sages, great rushi-munis to understand and follow by knitting various practices, rules of life, sanskaras and biggest & oldest ever documented repository!

Using this repository and by being the pracharak shishya of the guru-shishya parampara, a big number of dharmiks are trying to bring the knowledge to people in an ‘acceptable format’ or ‘bite sized’ information (not gyan). Is that really the right step-by-step approach to ultimately bring all into the purview of understanding santana thoughts and practices completely and later start following them?

I also observe a lot of well-intentioned Hindu’s getting pulled into the same tricks of social media which they initially took up only to reach out to more people. The initial intension was noble but gradually they get taken over by the thought of talking to people in the language they understand, where the core problem is that the language (set of life practices, attitudes, approach) which is understood by all itself is very shallow, promotes alasya, wants everything to be served to a person instead of motivating the person to be a seeker and initiate the journey of being wiser than the previous day, every day.

Another example is where a lot of these dharmiks write smaller bite sized pieces to explain various aspects of sanatana in the modern understandable language and all the references they get to cite are non-Indian westerners? So, by giving reference of a recent researcher ( 50 -100 years is recent in this context) from the western world we try to ‘justify’ that that our age old knowledge and practices are scientific and relevant by putting them in a tool-set which is modern but very limited and certainly very different from the original tool-set where these practices were originated. Why are we unable to provide the vedic and shastriya-tarkik scientific explanation and have to switch to modern science process to explain it. The indic scientific explanation also goes to the last molecule of detail and in a simple way but every such explanation disappears in the chaos and the explanation using the modern scientific/technical language rather starts sounding like a rant.

I have my doubts if this is the right path. Can’t articulate all of them well here as my vaakpatuta isn’t good enough to bring all of them forth.

That is the reason I am sharing this open question to all!

I have seen a dharmiks sharing their disappointment at times on twitter, some are sad, some are angry, some are anguished, some seem to be giving up and but still trying their best to keep on the path as they realise it is a difficult one. But I have my doubts if this is the right path to reach the goal post we want to reach.

Rajiv Malhotra ji has been working on the project of creating ‘Intellectual Kshatriyas’ for long. He gets very annoyed at a lot of emotional hindus not been able to present their case well and defend sanatana and dharma. But some IKs that would have been created by now, are they visible? Or have they been lost to this chaos as well? If yes, then is this one of the right paths?

The fundamental question is, if I am willing to change the game itself because it is on shallow and incorrect grounds, doesn’t follow the right rules and has blind folded the participants/participants don’t want to play with blinds unfolded, Can I really change it by playing it, by being a part of the same game and playing it by same rules? It is beyond that point of metaphor that ‘if you want to understand the game, you will have to play it first’ as we have been part of this game for so long and now are willing to change it (atleast I have made this transition, some are lucky to always have been outside it) because we have understood it to be the faulty one with a adhogaami goal post.

Sanatana system has enormous experience of having set up the game from scratch, define the rules, enable the players with capabilities and skills, clearly define the goal posts and provide the attitude that there are various right paths to reach the goal posts. But the dharmiks are not able to create the new game. Prevailing conditions are already known like secular democracy, politics being priority of govt as it may be ruling but ultimately it is a political party, too much left ideology influence, conversion missions, religious extremism. My point is the game has to be designed to address these conditions/limitations so citing them as reasons doesn’t answer the question.

There is overload of indic information on twitter now, be it about temples, our pauranic tales, various roopa of Ishwara, Devi’s. But is that really serving the collective purpose that we want to achieve or is it just adding to the chaos?

This thought got triggered when I was reading this article on indictoday.com https://www.indictoday.com/quick-reads/balis-water-temples-understanding-technology-dharmic-rituals/ by Dr Nagendra Setumadhavrao

I am here to share my journey from the regular run of the mill life to reach Brahm Varchas - the pinnacle of knowledge and existence ! View all posts by Brahm Varchas